Preliminary 2020 Census numbers show that Louisiana’s population increased by 2.7 percent to over 4.7 million people. Only 19 of the 64 parishes increased population or remained the same. The rest of the parishes lost population. The area of Southwest Louisiana increased 5.1 percent. In Calcasieu Parish, the total population went from 192,768 to 216,785.

The city of Lake Charles had the most growth of communities in our five-parish region and is the sixth-largest city in the state. In the 2010 Census Lake Charles had a population of 72,531. The new figures show 78,656, an increase of 8.44 percent. This reflects the thoughts of several area observers prior to the hurricanes of 2020. The question is, now, how many residents remain here or are coming back when housing is available?

The population of the five parishes of the SW La. region, now totals 313,951. Further analysis will help us chart our course as a state and region. These census numbers will be used in redistricting for our congressional seats, legislative and local election districts.

A review of the congressional population districts shows the 3rd Congressional District held by Clay Higgins has about 785,824 residents, The target goal of each district is 776,293, so only about 9,531 too many. District 1 currently held by Steve Scalise has 36,292 too many residents, and District 6 held by Garret Graves has 40,173 too many. District 4 held by Mike Johnson is 47,947 short, and District 5 held by Julia Letlow is 37,049 short. District 2, formerly held by Cedric Richmond, now held by Troy Carter has the least variance at about 1,001 short. Redrawing the Congressional districts will be closely watched. Some African American legislators are pushing for two minority majority districts since the African American population in the state is about 33 percent. Of the six congressmen, two would then likely be Black.

The two northern districts, 5 and 6, need more people. The northern districts could be configured to have a I-20 District and a Central Louisiana District with the other four districts divided into contiguous districts that keep communities with similar characteristics together. Hint: keep the Lafayette and Lake Charles metros in the same district. 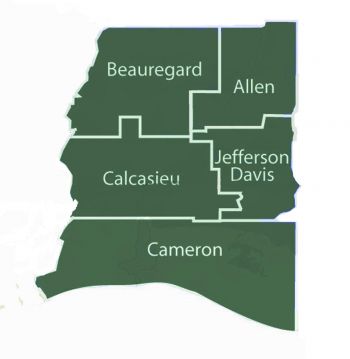 Submit Comment
Go Back
About The Alliance
Events
News
Blog

Chamber SWLA: Number 1 In the State

The Chamber SWLA - representing Allen, Beauregard, Calcasieu, Cameron and Jeff Davis Parishes - was named Large Chamber of the Year by the Louisiana Chamber of Commerce Executives (LACCE) at their annual meeting held on November 7 and 8.

“To receive this recognition from our peers is an honor and a credit to the hard work of the staff and the support of our Board of Directors and volunteers. This plaque represents all of the efforts we have made over the past 12 months to help our region rebound and continuously improve and promote our region as a great place to live and work,” said George Swift, President/CEO of the Chamber SWLA/SWLA Economic Development Alliance.

Our Recent Trip to Washington D.C.

The impact of small businesses is often overlooked but when combined, they have tremendous financial force in sales and employment. These mostly locally-owned businesses form the fabric of each community where they are located. According to the Small Business Administration there are approximately 32.5 million small businesses which employ 61.7 million people. That is 47.5 percent of all jobs in this country. These are your neighbors and people you know who support our schools, sports teams and churches.

An Introduction and Observations

As for my impressions of Southwest Louisiana, I have learned that the region’s people are tough, resilient, and hardworking. They make contributions to our local, state, national, and international economies.