The Alliance Foundation received a check in the amount of $5,000 from Union Pacific to support its initiatives. This donation is the 2018 grant from the Union Pacific Railroad Foundation to the SWLA Alliance Foundation’s SWLA on the Move campaign.  The current plan of work under the SWLA on the Move Campaign is to address the critical issues facing our region: workforce development, business recruitment, business retention and expansion, regional marketing, and building a single voice for a true regional partnership. 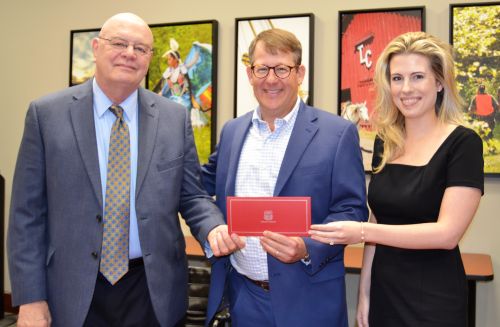 About The Union Pacific Foundation

About the SWLA Alliance Foundation

The Chamber SWLA Board of Directors approved the following resolution during the fall of 2021:

Saturday’s elections proved once again that a low turn-out can allow a small percentage of voters to determine the outcome. My Dad was a Marine and he always impressed upon me that those in the armed forces were there to be sure all Americans could have freedom. It was our patriotic duty to vote.