The Alliance Foundation received a check in the amount of $3,000 from MidSouth Bank to support its initiatives. This donation is the 2018 grant from the bank to support the Foundation’s SWLA on the Move campaign.  The current plan of work under the SWLA on the Move Campaign is to address the critical issues facing our region: workforce development, business recruitment, business retention and expansion, regional marketing, and building a single voice for a true regional partnership. 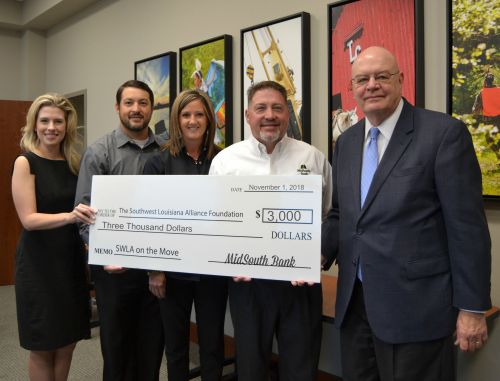 MidSouth Bancorp, Inc. is a bank holding company headquartered in Lafayette, Louisiana, with assets of $1.8 billion as of September 30, 2018. MidSouth Bancorp, Inc. trades on the NYSE under the symbol “MSL.” Through its wholly owned subsidiary, MidSouth Bank, N.A., MidSouth offers a full range of banking services to commercial and retail customers in Louisiana and Texas. MidSouth Bank currently has 42 locations in Louisiana and Texas and is connected to a worldwide ATM network that provides customers with access to more than 55,000 surcharge-free ATMs. Additional corporate information is available at MidSouthBank.com.

About the SWLA Alliance Foundation

The businesses enclosed are local establishments, managed and operated by your friends and neighbors.

Share this Guide with anyone who needs a great job!

Region is ready for entrepreneurs

If you have thought about opening a business or have a business idea you want to explore, or if you operate an existing business that needs expansion or re-imaging, then next month in SW La. is for you.

Regionalism is important for continued progress

To compete internationally our best shot is to keep the regional approach. As has been said …to succeed we must think globally, act locally.