Southwest Louisiana – The Chamber SWLA released the recommendations of their I-10 Bridge Task Force at a news conference today.

These recommendations, which were approved by the Chamber board on Tuesday, provide the state with a well-researched, detailed action plan to tackle the most critical interstate bridge project in Louisiana by a private venture and without incurring debt or using any tax revenue. More importantly, based on the I-10 Task Force’s proposed plan, the new bridge could be completed within three years with the cooperation of the Louisiana Department of Transportation and Development (LADOTD).

The current I-10 Calcasieu River bridge opened for traffic in 1952 and was designed for a traffic load of 37,000 per day and a 50-year life span. In 2016, the average daily crossings were over 80,000. The National Bridge Registry has rated the bridge a 6.6 out of 100. By comparison, the Interstate 35 West Mississippi River Bridge in Minneapolis, Minnesota, was rated a 50 when it collapsed.

“Replacing this bridge has been topic of concern and debate for decades,” said I-10 Bridge Task Force Chairperson Keith DuRousseau. “The bridge is vital to the economic fabric of our region and we cannot afford to wait while the state and federal government continue to delay and to allocate funds to projects in other areas. Our research was very eye-opening on the various delays and made us even more determined to find a solution.”

The I-10 Bridge Task Force’s due diligence included meetings with multiple Louisiana state agencies as well as experts in infrastructure financing, design and construction. The group also obtained thousands of pages of material from LADOTD via the Louisiana Freedom of Information Act and conducted legal and financial research. In addition, members of the Task Force visited communities in differing stages of securing similar bridge infrastructure improvements to learn from their experiences.

As a result of their exhaustive research, the I-10 Bridge Task Force concluded that the bridge can only be replaced in a reasonable period of time through an innovative public private partnership called a “P3.”

“A P3 harnesses private expertise for public benefit,” explains DuRousseau. “It’s a proven, common sense solution for this project. The builder would have to be repaid with the use of electronic tolling like we see in Houston and many other cities across the country.” 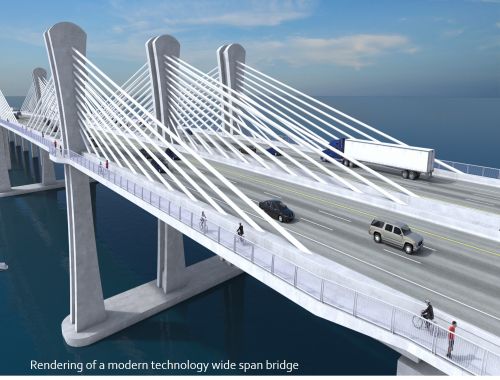 The recommendation for the design of the bridge calls for a new six-lane bridge with shoulders and a pedestrian walkway, located immediately north of, and parallel to, the existing bridge, with ingress and egress at Sampson Street over the railway into the City of Westlake. The current bridge would remain open while construction of the new bridge takes place and tolls would be reduced for local residents.

This recommendation is based upon the following facts:

The next step is for the I-10 Bridge Task Force and the Chamber SWLA to work with the SWLA legislative delegation to file any necessary legislation in the upcoming session and to ask the LADOTD and the governor to issue a Request for Proposal (RFP) for private ventures to design, finance, construct, maintain and concession the new Interstate 10 Calcasieu River Bridge by entering into the P3 partnership. The I-10 Bridge Task Force recommends that local contractors and vendors be given priority for service to the private venture. It is hoped that the project will start within the next 18 months.

“We greatly appreciate the hard work and diligence of the task force,” said Phil Earhart, Chamber SWLA Board Chair. “Thanks to them, we have a well-researched and achievable plan for a new I-10 bridge.”

The I-10 Bridge Task Force concluded that if the bridge is not replaced in the next five years, Southwest Louisiana, the state and the entire country could suffer drastic commercial and strategic consequences, adding that the cost of doing nothing could result in loss of life, devasting traffic congestion, loss of large scale capital investment and distribution delays. “It’s time to come together once again for the good of our region and ensure that a new I-10 Calcasieu River Bridge is built sooner, rather than later, for the safety and continued prosperity of our region,” says DuRousseau.

The I-10 Bridge Task Force members were chosen from throughout Southwest Louisiana based upon their history of community engagement, professional skills, credibility, business acumen and desire to spearhead a local grassroots effort to advocate for a new bridge. Each member pledged that their volunteer service would not be used to derive benefit for themselves, their employers or families. The group has worked over the past 15 months conducting due diligence to prepare a recommendation for the replacement of the I-10 Calcasieu River Bridge.

National Small Business Week is celebrated in the United States the first week of May each year. The SWLA Economic Development Alliance is joining in support of small businesses by promoting a new, online program to help small businesses called SizeUp!

The service is available for free to all local businesses www.allianceswla.org/SizeUp. SizeUp delivers powerful market research and business intelligence so Southwest Louisiana businesses can make data driven decisions using analysis that has historically only been available to big corporations.

CLECO has donated $5,000 to the SWLA Alliance Foundation to address the critical issues facing our region: business recruitment, and business retention and expansion.

Getting Back to Work

Virtually every business we know is seeking workers. Regardless of the business type, there is a shortage of folks who are ready to return to the workforce. At the end of this month, the extra $300 unemployment enhancement will end in Louisiana. This may urge many who have not been in the workforce lately to consider finding a job.

The late, great Hall of Fame pitcher Satchel Paige is known for the quote, “Don’t look back; something might be gaining on you.” Noted futurist Brian Solis shares that belief, especially as it pertains to businesses and their need to look forward, not back.
That is especially the case here in the post-pandemic world, according to Solis, who maintains that businesses should not be yearning for a return to the old normal but rather must adapt to the changed behaviors of consumers in what he calls the “novel economy” — as in the novel coronavirus.
READ MORE
More Blog Posts