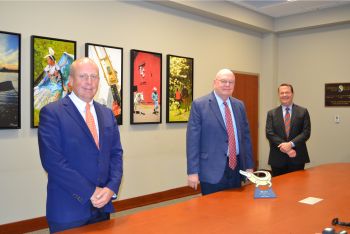 After a welcome from Harold Rowland, VP and General Manager of L’Auberge Casino Resort, George Swift (President/CEO of the Chamber SWLA) emceed the event which featured videos from

From today’s presentation: “This year, the legislature faced the extraordinary challenges that the state faced with a regular session and two special sessions. This year, they had an unprecedented Fall special session dealing with the impact of the corona virus and the hurricanes. The legislature faces a number of challenges ahead of it – one of which affected all businesses, large and small, was the depleting balance in our state’s unemployment trust fund. When the balance reached zero, it triggered an automatic tax increase on businesses. The Southwest region’s Senator Mike Reese in cooperation with Senate President Page Cortez and other legislative leaders actually put forth and passed legislation which will prevent the automatic tax increase on business so that they can shore up the unemployment trust fund without placing an additional undue burden on business. That is one of the reasons we present the LegisGator of the Year award to Senator Mike Reese”

The Picard Group serves as the governmental affairs representatives for the Chamber SWLA in Baton Rouge and Washington, D.C.

The Chamber SWLA Board of Directors approved the following resolution during the fall of 2021:

Saturday’s elections proved once again that a low turn-out can allow a small percentage of voters to determine the outcome. My Dad was a Marine and he always impressed upon me that those in the armed forces were there to be sure all Americans could have freedom. It was our patriotic duty to vote.