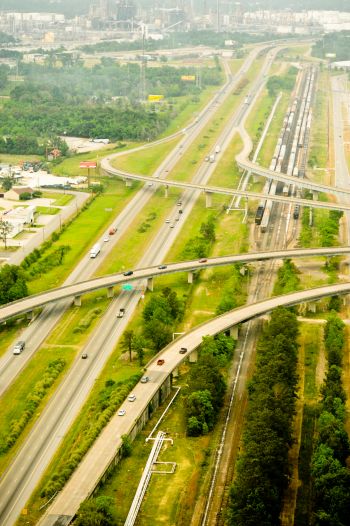 Southwest Louisiana is home to three Class I Railroads (Kansas City Southern, Union Pacific, and BNSF).  UP and BNSF share an east-west mainline, and KCS and UP each have their own north-south routes into and out of the Lake Charles metro area.  Secondary carriers include Port Rail, Inc., serving the Port of Lake Charles, Southern Rail Company serving Entergy, Timber Rock Railroad serving Ingevity in DeRidder, and Rail Logix serving the Lacassine Industrial Park in Jeff Davis Parish.

Interstate 10 is the major interstate corridor serving Southwest Louisiana with an east-west route from Jacksonville, FL, to Los Angeles, CA.  Metro Lake Charles is also served locally by the I-210 bypass route.  Other federal highways include U.S. Hwy. 90, 165, 171, and 190.  Hwy. 171 is a four-lane route between Lake Charles and Shreveport that also serves DeRidder and Fort Polk.  U.S. 165 is a four-lane route between Iowa and Monroe that also serves Kinder, Oberlin, Oakdale, and Alexandria.  U.S. 90 and 190 are east-west routes.